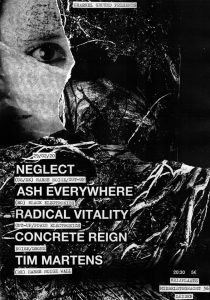 Neglect (US/DE): Sisto Rossi is no stranger in the German and American noise scene and has performed and released under various different aliases such as Wallkeeper, Nothing and Earth Chaos. Neglect is a continuation of his work under his given name and as such you will experience some of the rawest and uncompromising harsh cut-up noise.

Ash Everywhere (RO): Alexandru Trendler is a Romanian born sound artist who currently resides in Den Haag. His music is a blend of dark and heavy synth based post-industrial soundscapes which can be best described as “Black Electronics”.