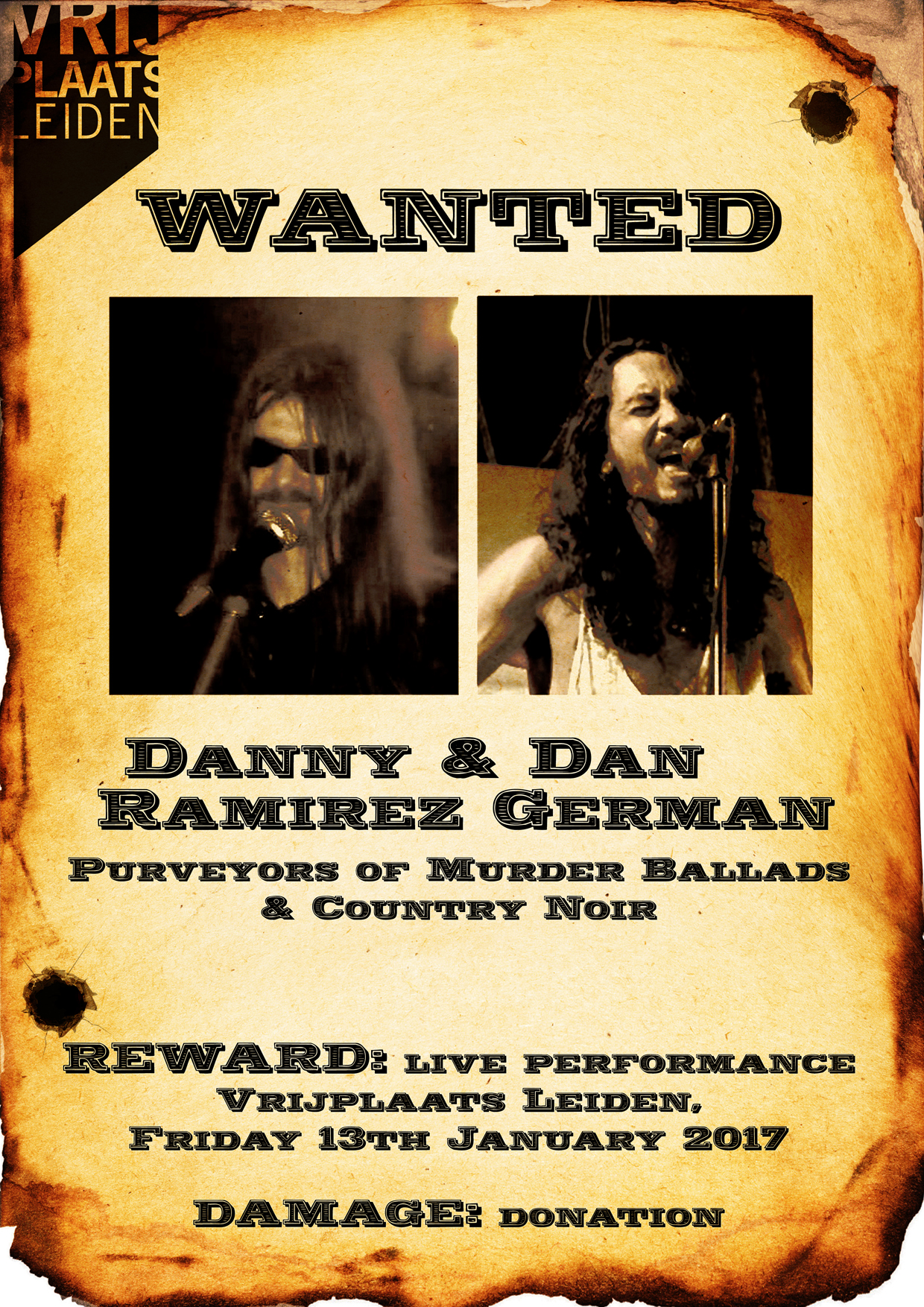 Friday the 13th, a day of superstition, bad luck, fear an death…

We couldn’t imagine a better day to listen to two singer-songwriters that specialize in murder ballads and unfortunate folktales, that’s why Danny Ramirez and Dan German will both perform a 45 minute set in the Vrijplaats on this first Friday the 13th of 2017.

Local singer-songwriter Danny Ramirez has been around since 1998. Entertaining the world with acoustic songs about death, murder and the dark side of the mind Danny Ramirez has been referred to as ‘Evil Elvis’, though he’s as much inspired by Roy Orbison, Johnny Cash and several black, death and thrash metal bands. Nevertheless Danny has his own easy listening murder ballad outsider music style.

In August 2002 Danny released his debut cd “Reload Your Gun”. A second album was released in May 2007, entitled “Misanthropicus Fanaticus”. Danny’s third CD “In Concert And Intoxicated” got released in August 2009. In 2011 Danny Ramirez released his online X-mas EP “X-mas Time With Danny Ramirez!”, which was followed up years later with the August 2016 online EP “Back With A Dungeon”.

Danny Ramirez last performed at the Vrijplaats back in 2012 was one of the first live performances at the Vrijplaats when they had just received the keys to their new home in at the Middelstegracht. He then performed in the downstairs bar area and we are very pleased to welcome him back and to now be able to offer him a proper stage in our upstairs theatre room!

Dan German surprised friend and foe with his performance at the Unplugged sessions in November. He is a bit of a mystery, a tall dark stranger who’s music takes by the throat and drags you off to the dark side of folk. His clever lyrics and raw emotion are a shattering reflection into the soul of a lost and bohemian wanderer, constantly struggling with his own identity in a hard and broken world. In the last 10 years he has taken his rootsy story-songs of outlaws, love, betrayal and self-loathing to the UK, Australia, Canada, the US and now Europe…

So come one and all and make this Friday the 13th a night to remember!

For more info on Danny Ramirez, check out his FB page: https://www.facebook.com/pages/Danny-Ramirez/247869715236415
his bandcamp page: https://dannyramirez.bandcamp.com/
and Roadkill Rekordz: http://www.roadkillrekordz.nl/dannyramirez/

For more info on Dan German, check out his FB page: https://www.facebook.com/dan.german.7568