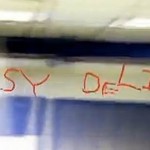 Synopsis: A couple were going to get together after the girlfriend had dropped off her package, but the boyfriend will have to keep waiting. Everyone, it seems, was at the post office for philosophy instead of postage.

Artist/writer/film-maker GX Jupitter-Larsen is based in Hollywood, California.

Shot around the world, from Hollywood to Switzerland to the Arctic circle in Norway, A Noisy Delivery has been six years in the making.

As writer & director, A Noisy Delivery is GX’s latest in a long line of film and video projects. In a piece entitled Blank Banner, during the 1980s, GX submitted a silent blank video tape to over forty video festivals. It was screened in nine.

GX’s 1994 vampire romp Holes On The Neck still enjoys a passionate cult following to this day.

His next cinema exploit is said to be on the theme of mad-scientists who use public transportation.