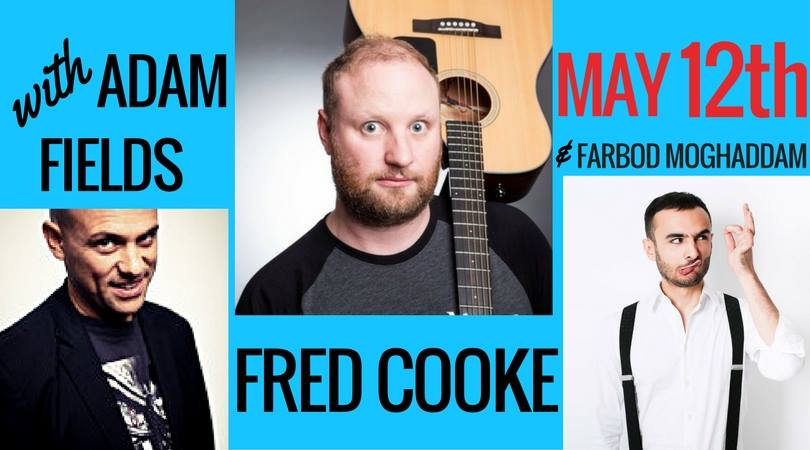 MAY DAY MAY DAY!! and it is time for our May edition of Leiden English Comedy Nights -Friday, May 12th 8:30pm
This month we have FRED COOKE flying Ryan Air just to be with us from Ireland!! As well as the very British Adam Fields, a mystery guest and Carly Baker (MC). DON’T MISS THIS SHOW!

BUY ONLINE TICKETS to avoid disappointment. This show will sell out!! and tickets are expensive at the door.

Fred Cooke (Ireland) is just good plain fun! Fred delivers a unique brand of comedy through his musical prowess and wild crafted physical story telling. In short he is HILARIOUS and I have asked him to fly over just for you Leiden and he said, ‘OK!’

He has worked on The Tommy Tiernan Show and supported him on tour and has also supported the likes of Eddie Izzard and Dara O Brian! Fred can be seen all over the Irish tele. His musical sketches are a constant hilarious success with his Republic of Telly Hidden Camera Prank reaching 1,661,213 hits on Youtube.

Fred has frequently been invited to perform at the largest and most successful festivals both here and abroad, including the Cat Laughs Comedy Festival, the Vodafone Comedy Carnival, Edinburgh Fringe Festival, Tampere Comedy Festival in Finland, London Irish Comedy Festival.
Fred Cooke has rapidly become a unique stand-up delivering a style of comedy that simply cannot be imitated.

Now for something completely British….Adam Fields (UK)! His stand-up performances are peppered with spontaneous wit and schizophrenic leaps into other personalities. A lively and visual comic with well-crafted routines that consistently induce hard and fast laughter.

Adam has worked with some of the world’s top comedians and was even the support act for British stand-up legend Jack Dee on his recent European tour. We are thrilled to have him grace our stage.

One more comic, yet to be announced. Watch this space!

And resident MC Carly Baker (USA) will be there to hold your hand through it all!

:::THE ENTIRE SHOW WILL BE IN ENGLISH:::

For 2017 we are asking all our guests to purchase your ticket online. Keeps it quick and easy at the door!

If for some reason this is not possible, please get in touch about reservations via:
woodeneye.nl@gmail.com

See you all there!!!!
Carly and the English Comedy Nights Crew